The Bazaar is excited to announce that its president Brad Nardick has delivered a TED Talk to inspire greater social consciousness in the workplace, sharing experiences and stories of how inclusion programs create a virtuous cycle for companies, the people involved in them, and the communities they touch.

The speech, “ Opening Doors for Inclusion” — which is now available on the TEDx YouTube channel — was delivered live from Chicago's Wrigley Field as part of an independently organized event, licensed by TED, that featured a variety of TED Talks, performances, and activations produced by TEDxWrigleyville. 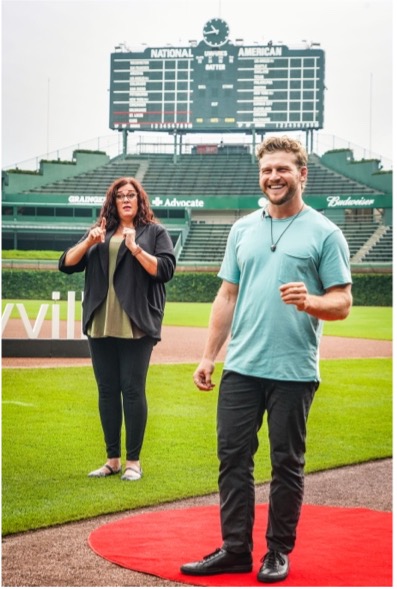 “The opportunity for me to speak was truly afforded by Bazaar’s employees and is a testament to their hard work and the milestones achieved within our Inclusion Program,” said Nardick.

The Bazaar’s Inclusion Program launched in 2014 and has expanded to account for 30% of the company’s total headcount, including people with disabilities, second chance and formerly incarcerated individuals, those who have experienced homelessness, and veterans.

Since launching the program, the company has experienced a transformative shift in its workforce — and it is not just lower turnover and higher productivity rates, but a rise in morale from employees who are engaging in meaningful discussions and free to be themselves when they are at their jobs. This social consciousness has allowed Bazaar to become more than a business. Its teams see a measurable differences in the community and have great pride knowing that employees evoked positive change.

“There is both a significant challenge in dissolving stigma, but also a greater opportunity including highly talented individuals — when we do, it lifts up the community, it makes us better, and the result can be shared by anyone willing to open the door,” Nardick explains.

In the TED Talk, he also recounts the journey of multiple employees, including a previously incarcerated individual who found greater life purpose through the opportunity to work, as well as an employee who is on the autism spectrum and the positive impact that employment has made for his social development, among other Bazaar team members’ stories.

“Many disabled people have faced so much rejection that they can’t even imagine a scenario where they get to participate in work,” Nardick said the Talk. “For example, employment for people with disabilities can mean greater economic self-sufficiency, an opportunity to use their skills, and more active participation in community life.”

He points to the early successes being the hiring process — and contrasts traditional corporate hiring in which candidates are mass screened for one entry level role and compares the approach used at The Bazaar — whereby candidates are carefully evaluated to determine their individual skill sets.

“It isn’t about finding bodies to fill a role, but rather finding people who would be an asset to the workplace community, and then working with them to figure out exactly where they belong,” said Garret Rosiek, Director of Employee Experience and Engagement at The Bazaar. “One of the pillars of our program is empowering every single person who works under our roof to take control of their careers, and to give them the tools and resources to do so.”

Nardick shares examples and valuable insights during the Talk, addressing the hiring process; implementing employment and management programs that lead to purpose-driven work; maintaining an open dialogue with the workforce who is responsible for a company’s success; and ways he has created a culture of growth and workplace environment where all people can succeed and thrive.

“It’s my belief that as a business owner, it’s your responsibility to do work in your community and to serve the population in a positive way, beyond just the company that you operate,” Nardick said.

TED Talks are influential videos from expert speakers on education, business, science, tech and creativity, with subtitles in 100+ languages. TEDxWrigleyville is among the most prestigious and prolific TEDx production groups globally whose program is streamed live by viewers in dozens of countries and hundreds of cities. The two-day program featured a variety of TED Talks, performances, and activations under the theme of "Humanity, The Repatriation."

Be first to get news and updates from us by subscribing to our newsletters.

Website is still under development , Please contact your designated Sales Rep if you are an existing Bazaar Customer – If you would like to become a Bazaar Customer , please fill out the Sign Up form